TUEN MUN, Hong Kong, SAR, China – So I have again decided to expand the scope of my blog to further help people who currently live in Hong Kong or are considering traveling to Hong Kong. In order to do this, I have decided to start reviewing various restaurants that I have gone too. As such these are mostly going to be restaurants that I highly recommend.

The first restaurant that I have decided to review is the Tuen Mun Curry House located on Castle Peak Road in Tuen Mun. I have gone to this restaurant at least two times a week since I found out about it in April. This restaurant, like many restaurants in Hong Kong is small and has limited seating and seems to be extremely popular with the locals. One of the greatest aspects of this restaurants is that you get a good size meal for relatively cheap, which is a hard thing to come by in Hong Kong. Often meals are over priced for the size that you are getting. For just around $100 HKD or slightly over $100 HKD (approximately $12 USD) I can get a main course, soft drink, a side of rice and two types of naan bread. I usually have a hard time finishing all of this and am able to sometimes get two meals out of this single meal. I have also gone here with a friend that has been to India and he has said that it is pretty authentic. This place is perfect for students who are studying abroad at Lingnan and living on a budget or for those people who love Indian Food.

As a tip for those future students that will be studying at Lingnan you can get here by cab or by taking the K51 bus and getting off at the second stop after Tuen Mun Town Plaza (TMT). The restaurant is marketed by a red sign with white lettering and it sits next to a 7-11 on the corner of the street. 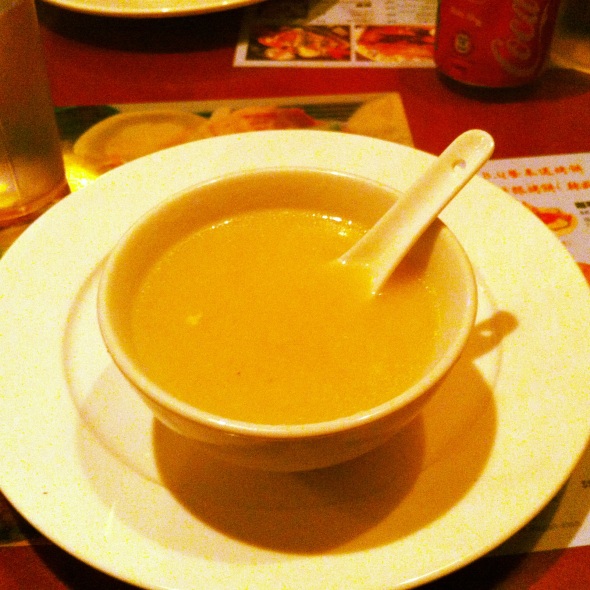 The End of an Era…

YAU MA TEI, Hong Kong, SAR, China – Today is a sad day for exchanged students everywhere in Hong Kong. There once was a great establishment named Mr. Wongs that I along with my fellow exchanged students would frequent before a night out clubbing. This restaurant offered sub-par food and unlimited beer for 50 HKD (approximately $6.25 USD). As of last saturday, Mr. Wongs was raided by the Hong Kong police and his liquor license was revoked.

I’ll be honest, I clearly didn’t go here for the food as it tasted horrible, but it was nice place to drink before going to clubs and if I drank here I wouldn’t have to buy a drink at a club and ultimately get ripped off while all of the girls in our group get free drinks, every week. Lets be real, I am definitely not about to go back there just for the food. So I am issuing a challenge to my few readers out there – does anyone know of a place in Hong Kong that offers unlimited beer and sub par food to replace Mr. Wongs? If you know any place you will be a hero to exchanged students all over Hong Kong.

FU TAI, HONG KONG, SAR, China – Hot Pot is a traditional Chinese meal. It consists of a large pot of boiling soup broth. There is usually one pot of spicy soup and one that is mild. Once the soup is boiling, raw thinly sliced meat, raw seafood, dumplings and vegetables are placed in the soup. The soup is brought back to a boil and the food quickly cooks. Once the food is cooked it is ready to be enjoyed with various dipping sauces. This meal is very similar to Shabu Shabu in Japan. Being a college student, especially one studying abroad, a meal like hot pot is ideal because it is usually all you can eat for a set price. In the case of this particular restaurant it was $98 HKD (approximately $12.25 USD) all you can eat and drink (beer included) for two hours. Not a bad deal.

Plate of beef, dumplings and vegetables 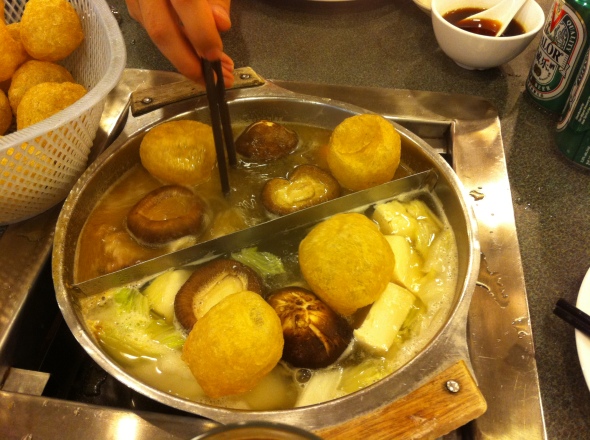 FU TAI, HONG KONG, SAR, China – Hong Kong is known for a variety of things including its tourist sites, many festivals, and club scene. However, one of Hong Kong’s best reputations is for its food. There is a variety of different styles of food in Hong Kong. Soho, located off of the Central MTR stop in Hong Kong, is full of various restaurants and bars serving food from all over the world. There is of course Dim Sum that is also readily available.

However, some of the best food comes out late at night. Starting around 9PM people will open up small cooking stations and begin to serving homemade food or street food. This food is unbelievable and for a very cheap price you can get a lot. These “street cooks” will make anything from noodles to grilled meets or even soup and dumplings.

Another type of food is the Hong Kong style Pancake. Unlike an American style pancake which is flat. A Hong Kong pancake is make up of gooey bubbles made from a sweet egg based batter. If cooked correctly (and not burned), these pancakes almost melt in your mouth. They are also make for a great snack or for desert. These are found at little shops that line very active streets.

MR. WONG’S, YAU MEI TAI, Hong Kong, SAR, China – Mr. Wongs, located a short walk from exit A2 of the Yau Mei Tai MTR has become a favorite place for out group to dine at. We have decided to frequent this less than glamorous establishment on Thursdays before making our way to LKF. The reason is it is cheap. For $50 HKD (approximately $6.25 USD) we get a plentiful helping of food. In fact, it is all you can eat and drink (beer included) with no time limit. Now I will be honest this place looks like a sketchy shack, but Mr. Wong caters toward international students. The food is sub-par to average at best and the menus is always the same. He serves Pearl River Delta Beer from China and if he likes your group he will occasionally throw in a bottle of spirits (either vodka or whiskey). However, for the price and the ability to have a fun meal with a friend, you can’t beat it. 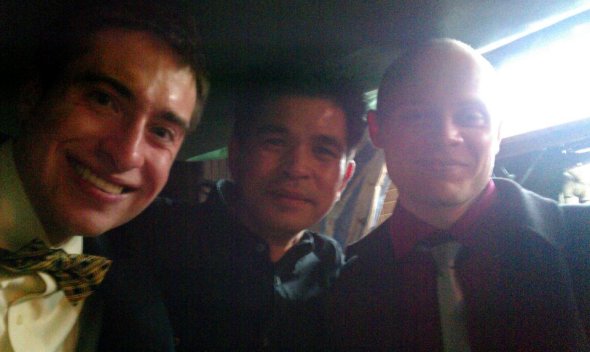 Center: The Man, The Legend….Mr. Wong

TEMPLE STREET NIGHT MARKET, MONG KOK, Hong Kong, SAR, China – The first week of classes are over, so its time to experience true Hong Kong culture, by touring around with a local. Our first stop is the Temple Street Market. As its name would suggest, the night market comes out at night. The streets are lined with local restaurants selling unique Hong Kong style food and hawking various goods. Some unique gifts can be found here such as a first edition little red book, once owned by Mao Zedong’s followers.

However, aside from the hawkers, our destination was a small restaurant that sells snake soup, a delicacy in Hong Kong. It is also only available during the winter. At first thought this dish may sound disgusting, however, it was delicious. It taste like chicken. 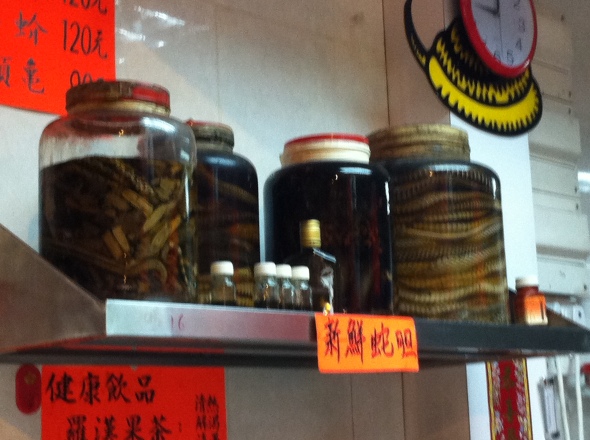